Skip to content
Cart
We recently gave some kit to the organizers of Yak Attack....the worlds highest mountain bike. This is what they had to say about the Super Thermo long sleeve shirt.....
"Byrnje Super Thermo Long Sleeve shirt.

Packing for Yak Attack, the highest mountain bike on Earth, is a challenge in itself. With a 10kg luggage allowance and a temperature range from +30c during the first few days down to around -20c on day 9, all gear taken has to be up to the mark.

I was very fortunate to get my hands on a Byrnje Super Thermo Long Sleeve shirt from Nordic Life. This proved to be one of the most valuable pieces of clothing that I have taken on the race (being race organiser, I am now on my 6th Yak Attack and 8th crossing of the Thorong La pass at 5416m). Not only does this top weigh next to nothing and take up very little room in the kit bag, it is also very versatile in its use. During the first 4 stages, daytime temperatures can be upto 30c but evenings can drop to single figures, so during those stages the Super Thermo top was ideal for wearing under a long sleeve casual top to protect against the evening chill. 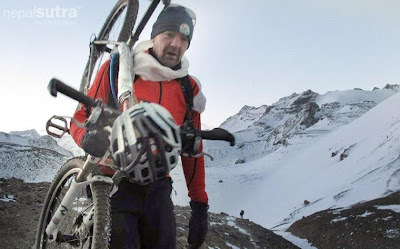 From Stage 5 onwards the temperature drops steadily as the altitude increases and this is when this top really comes into its own. With limited clothing I practically lived in my Super Thermo top from Stage 5 to Stage 10, riding in it during the day under a base layer and windproof coat and then as it was still bone dry even after a hard days riding leaving in on to go under a dry base layer and down jacket for the evenings.

With non of the lodges having heating and night time temperatures in minus figures for at least 4 nights, the Super Thermo top was also invaluable for keeping me extra warm in my sleeping bag whilst sleeping.

The pass stage this year was particularly brutal with a ferocious wind whipping up making the temperature very inhospitable (one competitor who had worked in the arctic had said he had never experienced such cold). Whilst I suffered mild frostbite on my fingers, through the use of a layering system, including the Super Thermo top as a base layer, my body temperature remained very comfortable.