Optional button
Ah! Finally the work load of modern life has allowed me a slither of free time to catch up with the blog! Spent yesterday breaking down our camp after the weekend, then the rest of the day putting tents and Lavus back up to wash and dry!
Anyway, it's been a great week for outdoors adventures for me, starting with my trip up Kinder Scout with Jon Doran of Outdoorsmagic. We arranged to meet at the Waltzing Weasel pub close to Hayfield for a chat and a chance for me to take Jon through the kit. Being a journalist, Jon had a very open approach to the pile of mesh kit staring back at him......including the now infamous mesh boxers! He took a load of pictures and accepted the kit we gave him to test.
One of the great things about this job is getting out with like minded people to some great places (this is not gloating....just a statement!). I had never been to the Peak District before and so looked forward to getting out there. I was especially excited to be going up Kinder Scout....home of the Trespassers! Obviously, the anniversary had only just passed and so it was all fresh in my mind. Cool.
Not knowing the area I was a little apprehensive due to aforementioned crash a few weeks back......but I figured I'd be fine so long as Jon didn't get up too big a head of steam.....which I again began to worry about after his talk of 24 hour solo mountain biking races and 7 hours in the saddle... 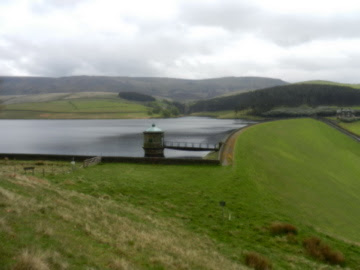 We passed the reservoir and headed up the the William Clough leg of the path. It was a mildish day with temperatures about 9C and light rain on and off. I had my Super Thermo mesh T-shirt with shoulder inlay, Brynje Sprint 3/4 Zip Polo on top, mesh boxers and my new Bergans Kjerag soft shell when it cooled off, or the rain came in. 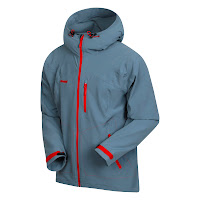 The William Clough  path was a wonderfully mix of trail, rock and water......and we both stared at in wondering what it would be like on a Mountain bike! One word.....FUN! However, as we got higher, it cooled off a little but we were moving enough to generate some heat.  Jon opened his shirt to vent and was quite taken aback at the instantaneous result when you vent a Brynje mesh. You dump the heat straight away, then zip back up. Perfect! I did the same with my Zip polo, then threw on the soft shell to ward off some rain. The soft shell is very light and stretchy, but does remarkably well at keeping out the wind and the odd shower or drizzle. 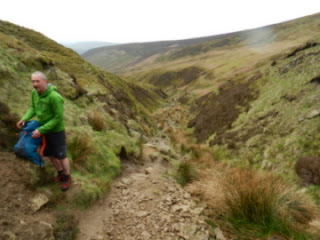 As we got higher and higher up on to the plateau, the view really opened up and we got to see the sprawl that is Manchester and Stockport. However, it looked very contained from where we stood, and I envied all those living there who have pretty quick access to a great playground like this.
We continued over to the Kinder Downfall. I didn't really know what to expect, but I was very please to find a mini oasis of pools and mini waterfalls nestled in a shallow gully. It was time for a break, more chat about Brynje kit and time to take some photos. Here's one of the new Bergans pack I'm testing. It wasn't really a fair test since it's a 40L pack out on  a day trip! But here it is anyway......I'll be bashing it about a bit more on other trips. 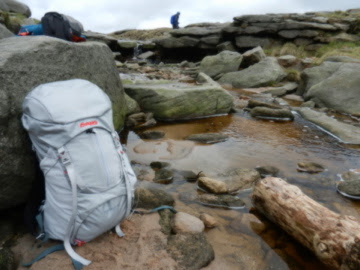 However, another new addition is the Bergans Kjerag soft Shell pants. They are a fairly technical 4-way stretch pant with ankle knee and bum reinforced material. The ankle is adjustable, which is good so you can pull over your boot.......maybe like a mini Gaiter? I'll be honest and say they were a tad warm for this trip. They are really comfortable and fitted so there is no material to flap about in the wind. They also come in different lengths so you can adjust for that height Vs waist issue that arises with some trousers. They certainly held out the wind and dealt with the showers and drizzle we had without a problem. I'd have to say though that the ideal conditions for them (when used actively) would be below 5C. But that's what testing is all about for me. I have another pair, the Krosso pants, that I now know would have been perfect. They are lighter, just as stretchy and wind/water resistant......next time! 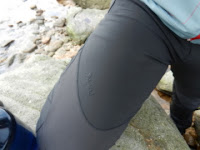 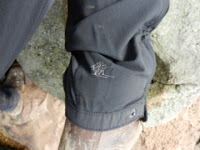 As we progressed over the plateau, the views kept on opening up and getting better, and so did the temperature. I unzipped my soft shell jacket and Sprint shirt to vent, and got my temperature to be just about right. It was all down hill from here as they say, and we got talking about the deficiency of Mac computers (please, no hate mail from Mac lovers......you have to accept they're not perfect!).
I am now a firm believer in leaving the hardshell in the rucksack for all but the worst weather, and will stick with this Bergans Kjerag lightweight soft shell going forward. Same with the trousers....although I'll go with the lighter Krosso version.
As for Jon, you can read his write up about Brynje here. Cheers
Share Share on Facebook Tweet Tweet on Twitter Pin it Pin on Pinterest
Back to The Right kit
Example blog post
Example blog post
Example blog post