Skip to content
Cart
Back in testing mode this week as I had the opportunity to go home to God's country .....Wales (I know, this is a matter of opinion.....but it's my opinion!). I was, of course, spoiled for choice when it came to routes, but I headed up to Tryfan and my old stomping grounds from my youth! Tryfan is my favorite mountain in the UK (OK, I have not climbed them all, but until I do Tryfan has it), and it's also the name I chose for my son, so a pretty special mountain all in all. Aside from all that though, it has some fantastic routes and something for everyone. I decided to do the Bochlwyd horseshoe, named after Llyn Bochlwyd (or Australia lake as I have always called it since first setting eyes on it). This is an awesome route for anybody who likes scrambles....taking in the North ridge of Tryfan, the summit of Tryfan, down to Bwlch Tryfan and up Bristly ridge. 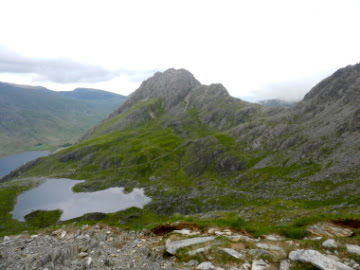 I always envy greatly those who are skilled with the lens, and I'm afraid that the above is my best attempt at capturing the superb scenery that is part of the horseshoe. The lake in the foreground is Bochlwyd, with Tryfan's West face rising from it. Follow Tryfan's ridge to the right and you come to Bwlch Tryfan, and on from there is a poor shot of Bristly ridge.
Weather was in my favour (kind of......I had planned to test some of the Bergans waterproof jackets we are carrying...Helium and Glittertind) and was about 10C with wind on the exposed ridges. My kit of choice was my trusty Super Thermo T-shirt with shoulder inlay with my equally trusted Sprint zip polo shirt over it. A zipped cap layer works best when wearing Brynje mesh.....that way you can unzip and dump the heat very fast, then simply zip back up again. I also had my Sprint Boxers.....although I probably should have worn the Super Thermo Boxers....more later! As my trousers I wore the Bergans Krosso pants. I was thinking of the Kjerag pants, but they proved to be pretty warm on a trip to the Peak District a few weeks back, so I wanted to try the Krosso, and see if they are up to the job of scrambling. The route starts to the left of Milestone buttress, and I was on the path by 9am, with a mixed sky of cloud and blue above. I was really surprised to see people kitted out in waterproof jackets (and some also in waterproof trousers) since there was no rain. This, in my humble opinion, is not a good way to dress as you are about to start a long scramble and know there's some sweating to come! Waterproofs should be left in the rucksack until it's really chucking it down, otherwise you may as well wear a plastic bag. In these conditions it will be working against everything the base layers are trying to do.....i.e keeping you drier and warm. Anyway, I was up and gone without saying a thing to them and started the walk up the North Ridge. I've been up here many times and can honestly say that I have never managed to go up via the same path twice! That's something I love about the North Ridge though, and you can make it as easy or hard as you like. I made it something in the middle as I tackled some climbing moves, but gave others a wide berth. I was alone (apart from others who were out that day) and I also still have the remnants of a dodgy knee from my crash a month ago. I wanted to pass my old friend the Cannon, and did eventually find it lurking to my left. 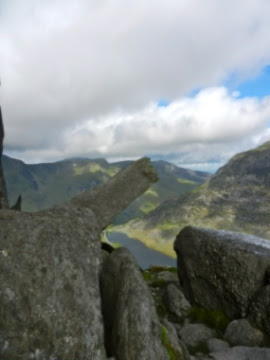 .....again....not the best shot.......must try harder! Having done quite a bit of scrambling/climbing up to this point, I had not even noticed my pants. This is a testament to how comfortable and stretchy they are. There's few things more annoying when climbing than being restricted by clothing. These pants did a great job.They also hold up to the wind very well, but at the same time have good breathability (obviously there is a compromise as you can't have great breathability without lack of windproofness). They where more than up to the job of keeping me warm, and in fact I was sweating under them at times. However, they seemed to dry out quickly, as they didn't stay damp for long. The soft shell fabric also stood up to the scrambling and scuffing against the rocks.....especially when I was doing my not-so-graceful arse moves up on to small ledges at times! There are no reinforced areas and so there might be a question about the longevity of the pants under multiple scrambling trips.......I'll let you know. But for an all round pair of trousers that can do pretty much everything well, the Bergans Krosso are definitely up there.
Once past the Cannon I took the more technical route for a while and hit a gully which I had to down-climb into, then it took me around the North Tower to the West face. After another short scramble I saw the welcoming site of Adam and Eve. There was to be no jumping on account of the aforementioned dodgy knee......I was tempted though! 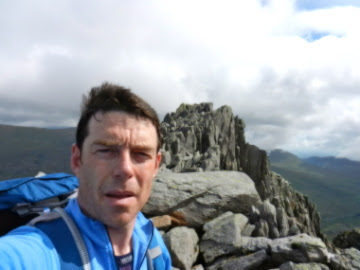 After a quick snack, it was off down to Bwlch Tryfan then up to the gully that dumps out onto Bristly ridge. On the scramble down from Tryfan's summit I kept my Brynje vest on, and also had it on for lunch. It was an excellent choice of kit because for it's size, it does a great job of keeping you warm and keeping the wind off your front. I kept it on until I reached the foot of Sinister Gully. This is a superb Grade 1 scramble, and, as with most climbing, is all about the feet! Figure out where your feet are going next and it's no problem. Once you pop out onto the ridge itself you get the amazing view of Ogwen valley, Nant Ffrancon and Tryfan from another angle......just wonderful. 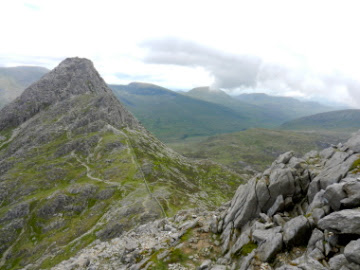 It was a quick cup of tea and a bit of chocolate and on up through the pinnacles. I bumped into a couple of students from Lincolnshire who joined me for the scramble, but i was soon apologising for taking them to the edge of a drop off, and we had to climb around to the west. We topped out on to Glyder fach as the mist/cloud came down. I stopped off at the Cantilever for a bigger snack (I know, it sounds like all I did was drink tea and snack!). I had some great self take pictures on the camera, but mysteriously they didn't come out? Very weird since I even checked them after taking them. I walked on to Castell y Gwynt then veered over to the decent on Y Gribyn. This was all done by feel rather than by sight because I couldn't see anything! Fortunately as I reached the edge of the drop into cwm bochlwyd, the weather blew over to reveal the cwm and lake below. It started to spit rain on the descent down Y Gribyn, but not enough to justify putting a jacket on. I greeted a few more people on the way down which made me realise what a quiet day it had been on the mountain. I could now see the ant trail going up to Llyn Idwal, and was glad to be alone.
Quite literally as I reached the car park at milestone buttress the rain started coming down heavier. I was kind of glad I'd missed it because it was such a muggy day, but it also meant I had to wait another day to try out the Bergans jackets!
Share Share on Facebook Tweet Tweet on Twitter Pin it Pin on Pinterest
Back to The Right kit